Power Up With Breakfast: Boost Your Brain Power In The Morning 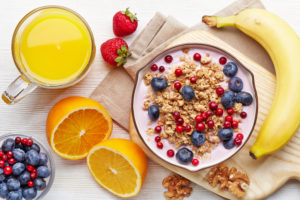 No matter how many times you press the snooze button, the sun winking through your drapes and that blaring alarm tell you there’s no use fighting the fact that morning has arrived.

If, like many college students, you find yourself stumbling out of bed and barely making it to class on time, juggling your books and a super-sized mug of hazelnut latte, it may be time to rethink your morning routine. While getting enough sleep is the obvious answer to bleary eyes and foggy brains, in the world of late-night cramming sessions and furious paper-writing, that’s not always an option. But neither is sitting through class in a daze while feeling like your brain is still sound asleep.

So what’s a sleep-deprived college student to do?

For starters, try to avoid eating anything sugary in the morning. If you can’t wake up without your cup of joe, go easy on the sugar or choose a calorie-free sweetener. Flushing your bloodstream with sugar first thing in the morning will only backfire later on in the day because it will cause a severe sugar crash about two hours after consumption. This dip in blood sugar can bring with it a release of hormones that can affect concentration and memory. Not exactly what you need while sitting through a double class of Anatomy and Physiology.

Aside from cutting down on the sugar, be proactive in getting your brain awake. Give it the jump-start it needs in the morning with these amazingly quick, economical and brain-boosting breakfast ideas: